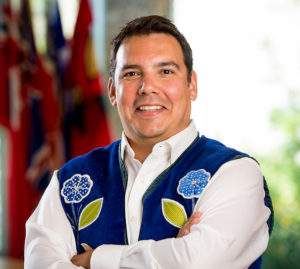 The Manitoba Psychological Society invites you to attend our Annual General Meeting, as well as a talk by acclaimed academic, author, and activist Dr. Niigaan Sinclair, on March 20, 2017 at Inn at the Forks, located in The Forks near the Children’s Museum.

Niigaanwewidam James Sinclair is Anishinaabe (St. Peter’s/Little Peguis) and an Associate Professor at the University of Manitoba. He is an award-winning writer, editor and activist who was named one of Monocle Magazine‘s “Canada’s Top 20 Most Influential People” and one of the CBC Manitoba’s “Top Forty Under Forty.” He is a regular commentator on Indigenous issues on CTV, CBC, and APTN, and his written work can be found in the pages of newspapers like The Guardian and online with CBC Books: Canada Writes. His first book on Anishinaabeg literary traditions will be coming out with the University of Minnesota Press in 2017.

His talk will be entitled, “The Psychology of Reconciliation.”

The cost for the dinner and presentation, subsidized for Members, is $30.00.  The student rate (for student members of MPS) is $25.00.

Attendance at psychology association business meetings as well as at education events may be considered as continuing education credits for registration with P.A.M.  Please print and bring the P.A.M. Verification of Attendance form prior to attending if you wish to claim continuing education credits.  Attendance at the full AGM and talk is expected to involve up to two credit hours. MPS will not issue certificates for this event.